I’m trying to focus on the glass of chardonnay in my hand and the snapper fillet on the plate in front of me but my gaze keeps wandering through the window and out past the trees. Not that the wine and food don’t deserve my undivided attention: they’re both delicious. But the grounds of this hilltop Mornington Peninsula vineyard happen to be dotted with one of the best collections of sculpture in Australia.

Visitors have been flocking here to the new Point Leo Estate cellar door and sculpture park since it opened in October last year. Some come to try the wines. Some to eat the marvellous food (below) of Phil Wood, ex-head chef of Rockpool, in Point Leo’s light-filled restaurant. But everyone comes for the sculptures: dozens of large-scale creations by Australian and international artists set against the backdrop of vines, sea and wide-open sky.

Point Leo Estate is owned by property developer John Gandel and family, and is the latest in a growing number of arty destinations in Australia established by wealthy winery owners.

The acclaimed TarraWarra Museum of Art, founded by Gandel’s sister Eva and her husband Marc Besen, sits alongside their acclaimed TarraWarra winery in the Yarra Valley. Tasmania’s MONA is built on the site of one of the island state’s first vineyards of the modern era, Moorilla Estate. And the gallery at Vasse Felix winery in Margaret River hosts exhibitions of works from owner Janet Holmes à Court’s extensive collection of Australian art.

At a major tasting marking the 50th anniversary of the wine region held at the venue late last year, my attention kept wandering again – this time the glass of chardonnay in my hand had to compete for my attention with the magnificent Emily Kame Kngwarreye painting on the wall.

The Taste and Look of Terror

There’s a strong resonance, of course, between a winemaker’s desire to capture a spirit of a place and a time – the taste of terroir – and the artist’s drive to achieve the same result with paint on canvas, or light on film, or words on a page. No wonder wine has also inspired many Australian artists over the years – some of whom are wine people themselves.

Point Leo reminds me (albeit on a far grander scale) of visiting Len Evans at his home, Loggerheads, in the Hunter Valley, in the 1990s. As well as being one of the most influential figures in Australian wine from the 1960s to his death in 2006, the irrepressible impresario, winery founder, show judge and writer was also a sculptor, and his chunky, Easter Island-like figures loomed out of the landscape of his Hunter property.

The life and wines of an earlier Hunter wine identity, Maurice O’Shea, were particularly inspirational for a number of Australian artists. In the 1930s and ’40s, O’Shea produced some of the most remarkable, long-lived reds this country has ever seen, in a tin shed with no electricity at Pokolbin.

Lured by the legend of the wines, photographer Max Dupain visited O’Shea in 1950 and shot a series of images during the grape harvest – almost sculptural depictions of the sheer backbreaking work of vintage.

O’Shea’s life is the subject of The Wine Hunter, Campbell Mattinson’s remarkable dramatised biography that portrays the winemaker as an artist himself, able to “see” the flavours of grapes.

Sampling a shiraz made from the same vines that O’Shea harvested while looking at Dupain’s or Shead’s images and reading Lehmann or Mattinson’s words is, for me, one of the great Australian art wine experiences.

This bright, fresh, focused chardonnay, with its pristine citrus fruit and wafts of oak is like a delicate watercolour painting that captures the cool maritime climate of the Mornington Peninsula and the breezy hillside location of Point Leo’s vineyard. It tastes rather good, too, with a plump roasted snapper fillet.

Valentines Dinner 2018 **SOLD OUT** Nothing says ‘I love you’ more then a 4 course dinner at Pt Leo Estate,…

Leisure By Natasha Lee May 21, 2018 When chef Phil Wood decided to embark on the ultimate sea change and…

Due to popular demand, we are pleased to announce the launch of Pt. Leo Estate Wine Club. The Wine Club… 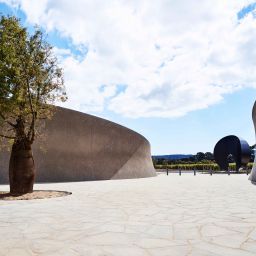 Australia Day Long Weekend Trading Hours
04 Dec 2019
Our website uses cookies from third party services to improve your browsing experience. Read more about this and how you can control cookies by clicking "Privacy Preferences".