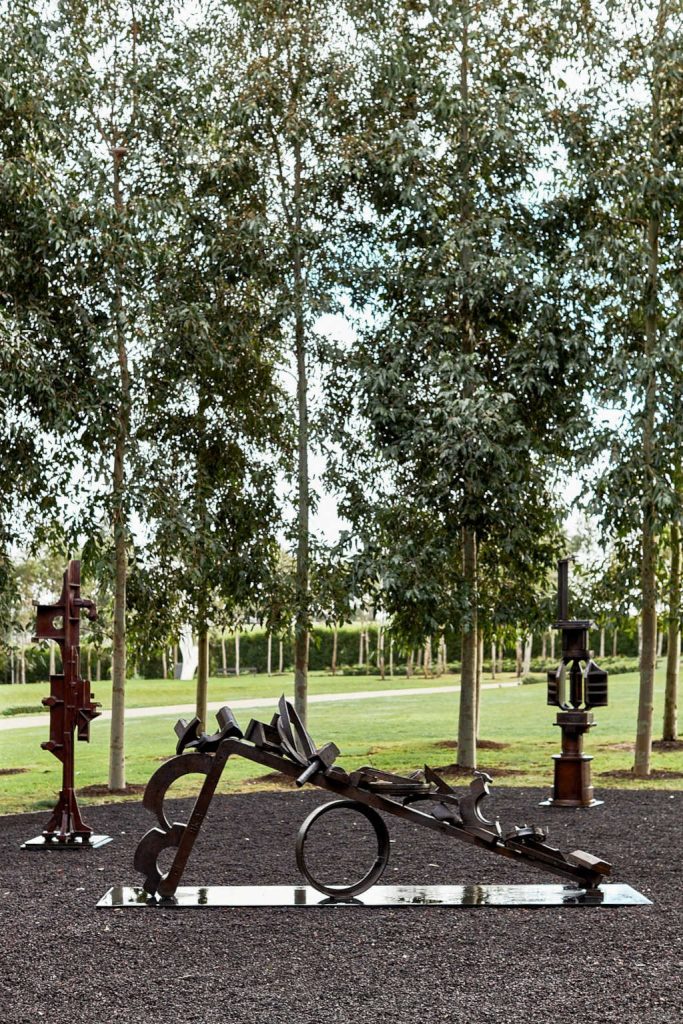 This suite of ten major bronzes by Robert Klippel has been installed in a glade of sugar gums as a contemplative setting within the wider Sculpture Park and to focus on the achievement of an artist described by some critics as Australia’s foremost sculptor. These works date from the final two decades of the artist’s long and productive life when he began assembling abstract, columnar forms – in effect three-dimensional collages – made up of a variety of oddly-shaped timber patterns (moulds) previously used by foundries for casting machine parts. In the 1960s, a large cache of these obsolete patterns had been salvaged from an old Sydney foundry by Klippel in company with fellow artist Colin Lanceley who also utilised these colourful forms in his own surrealist-inflected assemblages. Having stored the patterns for two decades, it was only in the 1980s that Klippel recognised their potential as components for the wood prototypes from which these bronzes were subsequently cast. While accurately replicating surface irregularities of the original timber pattern – such as wood grain or the outline of a foundry stamp and similar markings – the bronze-casting process enables multiples (an edition) to be made from a single form. The process was also a means of visually unifying the disparate shapes and surfaces of the wooden ‘prototype’. Robert Klippel’s early training was at the Sydney Technical College under the modernist sculptor Lyndon Dadswell. Even then, in the mid-1940s, Klippel was committed to abstraction as a necessary release, as he saw it, from the long-established tradition of figuration. Later, he studied in London and spent time in Paris where he exhibited with Picasso, returning to Australia in 1950. By 1954 he was established as a graphic designer but decided to move to the United States in 1957 where he remained, immersed in the vibrant contemporary art scene there until his permanent return to Australia in 1963. After then he was based in Birchgrove, Sydney.

While in New York, Klippel had begun to experiment with spikey machine parts and other found materials which he reassembled into finely-balanced abstract forms. In spite of his choice of artificial materials and focus on abstract form, his declared aim was to ‘express the workings of nature in its broadest sense’. A close friend of the sculptor, the painter and writer James Gleeson, once described these works by Klippel as ‘sonnets of form’. There were moments during his career when Klippel expressed a desire to install his free-standing sculpture in a broad landscape setting, going so far in the early 1970s as to collaborate with Gleeson to create a model landscape that featured scaled-down versions of the sculpture he was making at the time. A lifelong and prolific maker of models, drawings and collages on paper, Klippel’s oeuvre includes coloured drawings of stylized landscapes studded with forms comparable, more or less, to those seen in this display. Those landscape drawings, the 1970s model and this current installation can be said to reflect the artist’s aim to fuse the geometric or the mechanical with the organic.