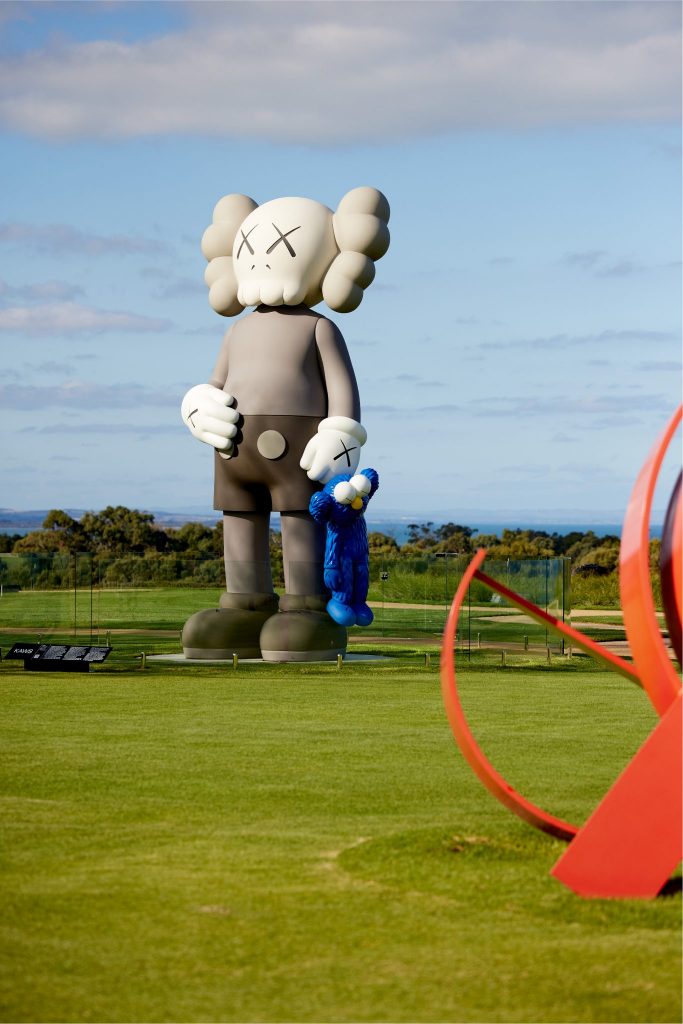 Best known for his monumental sculptures of ostensibly shy, vulnerable and sometimes lonely cartoon-like characters, the American artist Brian Donnelly was born in Jersey City, New Jersey in 1974. As a teenager, he often took the short train ride from his home to Manhattan, attracted by the flourishing skateboarding and street art scene he found in the metropolis. While still at high school in Jersey City he painted his graffiti tag KAWS on the roof of a nearby public building so that it was visible from his classroom.

Living in New York City from 1990, he trained there at the School of Visual Arts in illustration, working for a time as a freelance animator following his graduation in 1996. An early job was painting backgrounds for the animated series 101 Dalmatians. At night, he deployed his graphic skills to create subversive graffiti by tagging advertising imagery on billboards, bus shelters and other public spaces. He adopted his professional moniker KAWS at that time. It has no meaning and is based purely on the visual appeal of capital letters in this configuration.

Based now in a studio in Brooklyn, the artist conceives two- and three-dimensional works that reveal a wide range of influences from that of the eminent German painter Gerhard Richter to the famous American pop sculptor Claes Oldenburg. He also creates toys that feature his own hybrid creations alongside the classic Disney character Mickey Mouse, the iconic Michelin Man and other pop-culture, cartoon or animation identities such as Snoopy and SpongeBob SquarePants.

KAWS has been compared on occasion with Andy Warhol on account of this fusion of commercial and fine art, not to mention the universal appeal of his imagery that is drawn from contemporary life as much as it is from art and design history.

Invariably, in creating his larger-than-life figures – some are carved in wood while this work is cast bronze painted in a palette that is exclusive to this particular sculpture – the artist imbues his characters with a real sense of humanity, even pathos, that is underscored by gentle humour. Here, we see the main SHARE figure clasping a smaller blue-painted figure that often features in KAWS work. This is designated by the artist as the BFF (best friend forever) and, as we appreciate here, the BFF enjoys a close and protective companionship with the larger character. The artist’s work in general, and certainly here, expresses the fragile equilibrium of contemporary life, involving a complex mix of anxiety, vulnerability, hope and compassion, the latter being crucial, as the artist says, in this ‘age of loneliness’.